Remote training: online live with a trainer and a group. Available on demand, at time and place convenient to you, for groups of at least 5 participants.

ability to pay in 3 installments

A survey course in Java for programmers 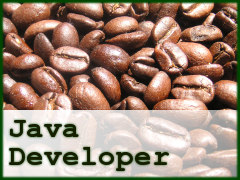 Our course is intended for those who:

Requirements: we expect prospective students to have at least basic programming fluency (in any language).

During the classes students work on Windows, but we introduce some elements of Linux.

The main idea of the course is teaching programmers not only Java's syntax and basic libraries, but also its idioms, conventions and practices. We expect course participants to possess at least a basic programming experience; therefore, during the workshops they can focus on, for example, important differences between Java and other (particularly scripting) languages.

The course encompasses Java as a language and several technologies important in the JVM world:

64 hours are of course not enough to become an experienced Java programmer, but knowledge and skills acquired during the course should allow programmers to participate in Java-based projects and gather further skills by experience.

A graduate of our course will be able to: