Remote training: online live with a trainer and a group. Available on demand, at time and place convenient to you, for groups of at least 3 participants.

A practical overview of the most important network services for an administrator: from Apache, proxy servers and Samba, through NFS, DHCP servers and LDAP, to mail servers, security and troubleshooting and monitoring. 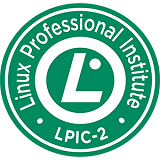 A preparatory training for the LPI 202 exam, which is organized by Linux Professional Institute. Passing this exam and the LPI 201 exam allows one to acquire the LPIC-2 certificate – Advanced Level Linux Certification.

We offer this training, combined with the LPI 201 training, as an alternate path for our classical LPIC-2 training path (the Linux Administrator course and a supplementary course), for persons interested only in the LPIC-2 certification who already have some familiarity with Linux administration.

For persons interested in a more in-depth look at the topics covered during this training, we recommend the Advanced Linux Administrator course, which provides a thorough coverage of several advanced technologies.

This training is designed for persons interested in taking the LPI 202 exam, and who have mastered the topics covered by the LPIC-1 certificate – that is, the basics of working in Linux, the command line and system configuration.

Open training groups are no larger than 8 participants.

Private training can be conducted for groups of any size, according to the Customer's preference. To assure high quality and good learning environment, the group size should not exceed 12.

The prices provided in the general tables cover the cost of an open (public) training for one person.

In the case of an on-demand training at the Customer's premises, you are required to provide the necessary facilities (room, computers, projector) and we will send an instructor to run the training. The price for a session is calculated for the whole group.

The cost of an on-demand training consists of:

The base price of an on-demand training varies, but it is usually around the price of an open training for 3-5 persons (regardless of your group size).

The typical travel and accommodation price for the EU/Schengen zone is under 1250 GBP (1500 EUR) for a 5 day session. We do our best to keep it as low as possible in your location.

The payment can be in GBP or EUR, whichever you prefer. The quotation we will send you with the exact amount in your currency will be valid for 3 months, regardless of any changes in the exchange rate.

For more information, or to register to a group, please contact us at groups@alx-training.co.uk and tell us know:

And any other questions that you may have.

We can also customise the training program of any of our trainings (or create a new one) according to your needs – whether you want to focus on particular solution used in your company, include material concerning a technology we do not usually cover, or create a tailor-made training.

Read more about customized training here or contact us at groups@alx-training.co.uk.

For individual persons for whom all scheduled open training is inconvenient, we offer individual consultation. Virtually all of our training courses are available as such.

During individual consultations, while it can be a direct equivalent of a group training in terms of subject covered, we can also provide more than that – we can solve problems, help choose appropriate solutions and provide advice on the most effective use of chosen tools.

More information about individual consultations can be found on the separate Consulting page. In case of any question, we encourage you to contact us.